Islam: A Warning from History

I created the leaflet below and went to a local convenience store where I stood outside and asked people if they would like to have one of my leaflets. I only asked males in the 30 - 60 age range. Not one person wanted to take one or ask me what it said. The numbers involved were quite small so I don't want to generalise too much. Even so, the level of blanking did surprise me. I had expected to be hectored and argued with and possibly shoved around but I did not expect people to refuse to engage with the subject so completely. My impression was that people don't know about Islam, they don't want to know about it; they just want to ignore that whole subject for as long as they can. I came away thinking that getting the substance of Islamic doctrine across to people is going to require a more indirect approach. Most people cannot stomach it undiluted and straight. I reproduce the leaflet in its entirety below:

ISLAM: A Warning from History 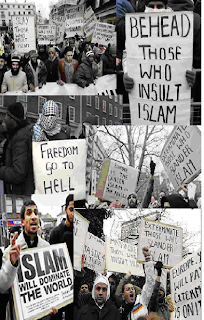 Those sounding the alarm about the spread of Islam today are often accused of “Islamophobia”, engaging in “hate speech”, or even of trying to stir up persecution against Muslims.

But is concern about the growing strength of Islam in our country really unreasonable and without foundation? Just look at the picture above…

All around the world today, yesterday and the day before people are being killed for no other reason than the fact that they are not Muslims. Do you think perhaps it’s time that you took a look?

Muhammad is the key to Islam. Islamic belief and law is based on the example of Muhammad. He declared himself to be a prophet and then began persuading others to accept  his declaration. The Koran contains words that he claimed to be revelations. His words and behaviour are the basis of Islamic doctrine.

Muhammad divided the world into Muslims and kafir (any non-Muslim). Muslims are required to struggle against the kafir in order to establish Islam’s dominance. Muhammad said, “Fight and kill the disbelievers wherever you find them, take them captive, harass them, lie in wait and ambush them using every stratagem of war." Koran 9:5

Jihad is the process of achieving this goal. It can be waged through warfare, subversion, immigration, economic warfare, creeping Sharia, etc.

For his first 13 years Muhammad preached a tolerant message which borrows heavily from Judaism and Christianity. He gained only 150 followers. He was weak. This is known as his Meccan period. Koranic verses from this time reflect this weakness and tolerance: “Let there be no compulsion in religion.” Koran 2:256

After this he became a warlord in and turned to violence, plainly contradicting the earlier message.  He averaged a jihad attack every 6 weeks until the end of his life.

His following grew at the rate of 10,000 a year during this period as he offered both worldly success through conquest and the prospect of rewards in the afterlife – especially for dying in the process of spreading Islam (the Muslim concept of martyrdom). He also threatened people with death for not becoming Muslims which proved very “persuasive”.

The Koran is divided between these two periods: Meccan and Medinan: The former tolerant, the latter violent. Islam contains messages of both tolerance and  intolerance.

Dip into the Koran and you will quickly discover it is peppered with hatred for kafir.

One episode in Muhammad’s career is the massacre of the Banu Qurayzah.

In March 627 AD, the tribe known as the Banu Qurayzah were besieged and isolated by their Muslim attackers led by Muhammad. They twice offered to leave their stronghold but Muhammad refused their request. He insisted they surrender unconditionally and subject themselves to his judgement. Compelled to surrender, the Qurayzah were led to . A third (and final) appeal for leniency was made to Muhammad by their tribal allies, the Aus. Again Muhammad refused. Muhammad ordered the men to be beheaded.

About 800 men were led to trenches dug in the market of and there they were beheaded; their decapitated bodies buried in the trenches while Muhammad watched. Male youths who had not reached puberty were spared. Women and children were sold into slavery, some being distributed as gifts among Muhammad’s companions. Muhammad chose one of the Qurayzah women (Rayhana) for himself. The property of the Qurayzah was divided up among the Muslims as booty. (1)

Rather than renouncing this behaviour, Islam bases law and religious rulings known as fatwas  upon it. In  2012 a Muslim cleric (Sheikh Yasir al-‘Ajlawni) ruled that captured women could be used a sex slaves for jihadist fighters in . This fatwa is in accordance with Muhammad’s example above. (2)

In April 2013 this ruling went into action when a 15 yr old Christian girl was captured in by jihadists.  According to Agenzia Fides, "The commander of the battalion 'Jabhat al-Nusra' in Qusair took Mariam, married and raped her. Then he repudiated her. The next day the young woman was forced to marry another Islamic militant. He also raped her and then repudiated her. The same trend was repeated for 15 days, and Mariam was raped by 15 different men. This psychologically destabilized her and made her insane. Mariam became mentally unstable and was eventually killed." (3)

In and elsewhere, jihadists are also continuing Muhammad’s tradition of beheading captives. These acts are extremely shocking but are all in accord with Islamic doctrine. (4)

Kafir as protected people under Islam

You may have heard that Jews and Christians have a protected status in Islamic societies. The meaning of this can be traced back to Koran 9:29 and the Conditions of Omar which were based upon it.

The Conditions were devised in order to establish rules about the treatment of Jews and Christians under conquest.  They actually put in place a temporary and conditional cessation of violence. Those living under the Conditions were known as dhimmis, which means those living in humiliation.

In order to feel themselves humiliated, dhimmis had to pay a poll tax called jizya; they were not allowed to defend themselves against a Muslim; they could not build or repair places of worship; they had to dress recognisably as dhimmis; they could not occupy positions of authority over any Muslim. If any dhimmi caused offence to a Muslim through, for example, mocking Muhammad, the whole dhimmi community was fair game for attack. Just history? No…

In there exists a small Christian minority. Charges of blasphemy against them are common and a rumour is sufficient to trigger an attack against a whole community.

In March 2013, because one Christian was accused of blasphemy, some 3,000 Muslims attacked the Christian Joseph Colony of , burning two churches and 160 Christian homes.  In 2009 in Gojra, eight Christians were burned alive, 100 houses looted and 50 homes set ablaze after another blasphemy accusation. (5)(6)(7)

Thousands of miles away in , , and the same pattern occurs – as it does everywhere a kafir minority exists.

In September 2013 reports emerged that the Muslim Brotherhood and its supporters were forcing the roughly 15,000 Christian Copts of Dalga village in south Minya province to pay jizya .

All Copts in the village, “without exception,” were forced to pay the “protection” money, just as their forefathers did nearly 1400 years ago when the sword of Islam originally invaded Christian Egypt. Some who refused were killed. (8)

In some cases, those not able to pay were attacked, their wives and children beaten and/or kidnapped. It’s the same in and .  Failure to meet The Conditions of Omar in any way makes the whole community a justified target for attack.

Next time you hear a Muslim spokesmen talking about the “protected” status of non-Muslims, remember what it really means.

Kafir not yet under full Muslim subjugation can also show dhimmi behaviour, as when President Obama said, “The future must not belong to those who slander the prophet of Islam.” (9)

Where Muslims are a minority they reflect the peaceful Meccan face of Islam. Where they are a majority the aggressive Medinan face surfaces.

When Muslims are in a minority, and relatively weak, as was Muhammad in , they talk of tolerance. This is the situation in many European countries. As their numbers grow, the threats and incidents of violence increase, as do demands for concessions to Islam.

When Muslims reach 50% of the population violence reaches its maximum. (e.g. ) As the proportion of Muslims grows above 50% the violence gradually reduces because the kafir are subdued and the number of targets for attack reduces too (e.g. ).  When Muslims are 100% there are no more targets and the violence returns to zero. This is “peace” as Islam understands it (e.g. )

An Inquiry into Islam

The Religion of Peace

The evidence in this leaflet is only the tip of the iceberg. The examples given can be multiplied hundreds of times over. Did you know there have been over 21,000 jihad attacks since September 2011? (10)
Posted by Greg Hamilton at 16:59