Speech likely to result in a more negative view of a minority is becoming defined as inherently hateful. The truth of what is said is irrelevant. A minority has a special protected status.

As well as feeling “oppressed” by such speech there is the possibility that a more negative view of a minority could engender discrimination towards them, regardless of the intentions of the speaker.

The truth about is Islam is very negative; far more negative than most people are willing to discover.

Telling the truth about Islam (even things openly acknowledged by many Muslims) can have the effect of casting Muslims in a more negative light.

Telling the truth about Islam could therefore lead to discrimination against Muslims, no matter how emphatically the speaker makes the distinction between Islam and Muslims.

Telling the truth thus becomes classified as “hate speech” and bigotry because of what some third party might do after hearing it or because the people most associated with Islam might be upset.

A person reporting harsh truths about Islam is therefore seen as someone stoking hatred and potentially causing discrimination towards Muslims.

The title of this post may be stark but when people accuse truth-tellers of "hate speech" this is what they are saying: Truth is hatred.
Posted by Greg Hamilton at 20:29 No comments:

A while back I looked at the figures from thereligionofpeace.com to see if the claim that Ramadan is typically a bad month for Islamic terror was true. What I failed to check at that time was the number of attacks occurring during Ramadan as a percentage of the attacks for the year that would be expected from the same number of days.

Taking this approach I found that there is a higher rate of Islamic terror during Ramadan than during the rest of the year.

Here is a table showing the Ramadan dates, number of days and the proportion of attacks we would expect to see during Ramadan if it was no different to any other period and the actual percentage of attacks which occurred during Ramadan compared to the total number of attacks that have happened that year. 2001 has been excluded because we don't have complete data for the year. 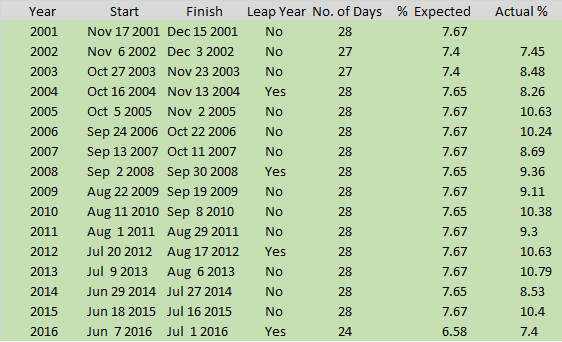 As you can see Actual % has always exceeded % Expected.

The average for % expected attacks is 7.56% during Ramadan whereas the actual average of attacks occurring during Ramadan is 9.31%. This figure is 23% higher than expected.

By this analysis Ramadan is the deadliest month. Base data taken from www.thereligionofpeace.com

On the other hand, we are also constantly told that we must not “confirm the narrative” of the jihadists because to do so would drive all these otherwise real and peaceful Muslims to their cause and they would take their side against us, becoming in the process the same non-true Muslims that we are told they despise in the first assertion.

We are told that the aim of the jihadists is to divide us, to drive a wedge between Muslims and non-Muslims and that to acknowledge in any way that what the jihadists believe about Islam might be valid or plausible would serve their aim.

To hold Muslims in general in any way accountable; to scrutinize their scriptures and ask probing questions about the nature of their teachings; to examine the character of Muhammad in the light of the historical accounts; any of these things could so offend Muslims that they would give their allegiance to the jihadists. This is what we are told or what is very much implied.

These arguments conflict with each other and I think the conflict points to a fact which is sensed at a deep level but is not articulated.

Islam is at its heart a tribal religion. The tribe is now a super-tribe, the ummah. Loyalty to the tribe is reinforced continuously. The tribal boundary is strictly defined and policed. This boundary is defined in terms of belief and non-belief, “The is no God but Allah and Muhammad is His messenger”. If you accept this you are an insider, if not, you are an outsider. Muslims are commanded not to take non-believers as friends, since he who takes them as his friends is one of them, i.e. an outsider.

One only needs to look at the penalty for apostasy to see how rigorously Islam treats disloyalty. The apostate, the person who renounces belief in Islam and thus betrays the tribe and becomes an outsider, is to be killed. The woman who betrays her husband through adultery is to be stoned to death. A woman should be loyal to her husband however badly he treats her.

We see a very strong bond of loyalty between Muslims and Islam and between all other Muslims. This is a tribal identity. We see them defining their group affiliation in their dress; we see them defending the reputation of the group by dissociating Islam from any harm done in its name, where it is expedient to do so but elsewhere the destruction is celebrated; Islam is always good and perfect, it can never be wrong.

In his book, The Righteous Mind, Jonathan Haidt set out his theory of Moral Foundations. What this theory suggests is that there are emotional/intuitive systems in the mind which are the products of evolution. During hundreds of thousands of years early humans had to adapt to living in groups in order to survive. We are the descendants of these groups. Living in groups requires certain adaptations like doing a fair share of the work in order to receive a share of the rewards; learning to accept the authority of elders allows knowledge and wisdom to be passed on and for a workable social order to be maintained; loyalty to the group enables a group to persist in the face of many challenges.

These adaptations have become part of our nature. We feel that loyalty is good, that betrayal is wrong. This intuition, and others like it, informs our thinking about the way we and others ought to behave. We can’t explain this rationally because it exists within us at a pre-rational level. It is not the product of thinking; rather, moral thinking is the product of the underlying moral foundation.
Haidt and his team have identified six moral foundations:

The absence of the Care/Harm foundation is evident in the brutal punishments of Sharia, the mistreatment of non-Muslims, and the general tolerance of cruelty. The absence of Fairness/Cheating is evident in the religious sanctioning of lying to further the aims of Islam (taqiyya), the instruction to feign friendship with non-Muslims whilst holding enmity in their heart towards them, the discriminatory laws established for non-Muslims in Muslim empires.

We see the Authority foundation expressed in the respect given to religious scholars and the fatwas that they issue for moral guidance on every aspect of life. It is also evident in the obedience given to the Islamic hierarchy.

So, in the present context, living within the Islamic moral order, Muslims feel the need to argue in favour of the tribe and its beliefs regardless of how much damage is being inflicted on outsiders or even fellow Muslims.

This may help to explain why conservatives are better able to understand the fundamental orientation of Islamic culture. They are better tuned in to the underlying moral foundations of Islam, though they clearly do not sympathize with the particular expression of those foundations.

The doctrines of liberalism are articulations of the Care/Harm and Fairness/Cheating foundations, with Liberty/Oppression also playing a part. This is why liberal societies have raised their levels of tolerance to such heights; as long as you are not causing harm you can say and do what you like. This is now changing as intolerant Social Justice Warriors extend the notion of what is harmful to a preposterous degree.

We observe what is going on in the world. We see the brutality meted out in the name of Islam; we can read about the brutal origins and history of Islam and the brutality of Muhammad himself.  And yet Muslims stay with it. They appear to feel no shame. Why is this?

It might well be the dominance of the loyalty foundation in their moral order that explains this. Unless a Muslim is prepared to abandon that which he/she has been taught to believe is the most important thing in life then the influence of this dominant moral factor will hold him/her in its power. Any number of rationalizations will be deployed to justify it. We are self-justifying animals.

Also, note this: it is a moral factor that does not sit well with tolerance.

Going back to the conflicting views set out at the beginning, people must sense that the loyalty foundation will take precedence if Muslims are confronted with criticism of their religion or we cease to intone the mantra that Islam is a religion of peace.

Given how central to Islam the loyalty foundation is it seems very likely true that whilst many Muslims are not openly at war with us at present, if we became more confrontational and less deferential towards their religion then their loyalty would ultimately be with Islam and fellow Muslims, however horrendous the atrocities committed by other Muslims.

A fact which is a key aspect of moral foundations theory is how moral reasoning is essentially a rationalization for the underlying foundation. This means that we feel something is right or wrong and provide plausible arguments to defend the feeling. The intellect serves as a PR person for the underlying moral intuition. Islam has well-orchestrated PR operating to deflect criticism and avoid any requirement for self-examination on the part of Muslims in response to atrocities.

Due to the primacy of loyalty in the Islamic moral order, it is indeed very likely that when push comes to shove Muslims will side with other Muslims under the Islamic banner. This is not an argument for not confronting Muslims at the present time but very much the opposite.

Given the changing demographics of non-Muslim societies, which in many cases now have fast-growing Muslim minorities, it is a matter of great urgency to start confronting them about the violent and imperialist teachings of their religion since with each passing day the ability to do so and contain a violent reaction is dwindling.

And you can be sure of this: when Muslims exist in non-Muslim societies in even greater numbers the primacy of loyalty to Islam (however ugly) will be even stronger. The demand for deference will be even greater.

In conclusion, the fact that the majority of Muslims are not actively attacking non-Muslims does not mean that Islam is a religion of peace. There actually seems to be precious little opposition between the Muslims who are killing us and the others.

Islam is a religion where loyalty is the primary moral compulsion. This would explain the absence of any substantial division between the jihadists and the rest.

We can expect religious tribal loyalty to assert itself if Muslims are confronted about their religion but that is not a reason to avoid doing this. The presence of growing Muslim minorities in non-Muslim countries makes this confrontation a matter of great urgency.

Religious tribal loyalty will also not decrease as Muslims become a larger proportion of the population. Quite the reverse.
Posted by Greg Hamilton at 08:09 No comments: