Boris and the Burka

It looks like Boris Johnson may face the Diversity Inquisition for his "insensitive" comments on the burka, more accurately known as the niqab, which is the one we see here.


If he does it will be another nail in the coffin for Britain's tradition of free speech, a tradition much finer than anything Islam has to offer.

Islam has a very ugly history of conquest, genocide, and enslavement, and unrelenting persecution of those with different beliefs.

None of this has ever been renounced nor is it likely to be since it is the inevitable outcome of Islam's core beliefs and the behavior of its prophet, Muhammad.

When I see a niqab-wearing woman (at least, I assume it's a woman), what I see is both a symbol of this history and the beliefs that inspired it and a statement of identification with and adherence to those beliefs and their consequences. The niqab suggests a strong adherence and identification; an unquestioning allegiance.

As I see it, the niqab is worn as a political weapon, not a religious observance. 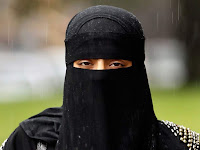 This is why I am so averse to the sight of this garment.


There is another related feeling that I have towards the niqab. The garment is depersonalizing.

Persecution of others is often accompanied by an element of depersonalization (e.g. "the filthy kuffar"), and the depersonalizing experience triggered by the niqab makes me feel they are more capable of being persecutors. Psychological studies of anonymity have shown that people are far less inhibited when their identity is hidden and the evidence that Muslims persecute non-Muslims is overwhelming, see Raymond Ibrahim's Bulletin of Christian Persecution.
Posted by Greg Hamilton at 13:50 No comments: