Reading from the latest edition of the ISIS magazine Dabiq, Sam Harris takes us with chilling lucidity into the mind and worldview of the jihadist.

Are you constantly exasperated by people's inability to step outside their 21st century Western worldview and put themselves into the mind of a devout Muslim? Do you wish politicians and media would stop talking about "alienation" and "poverty" and "lack of opportunity" because these are largely irrelevant to our understanding of the devout Mohammedans and their motives and aspirations?

These are all aspects of cognitive ego-centrism - the inability to step outside our own worldview in order to put ourselves into the worldview of another, especially when that other has a very different worldview to our own.

What is it like to adopt a perspective on life (and death) which is essentially medieval, but nonetheless real for that?

Listen to this 42 minute podcast by Sam Harris in which he asks his listeners to stop imposing their worldview onto the jihadists and accept what they say about themselves to be true and truly felt.

Posted by Greg Hamilton at 17:57 No comments:

The Sun Goes Round The Earth

When we are children we have an intuitive common-sense view of the Sun’s orbit around the earth. Based on our personal experience of the Sun’s journey, this is a reasonable conclusion to reach based on limited knowledge and experience; it is a conclusion that was reached by millions of people well into the 17th century, many of them very clever.

We can call this the naïve view of the Sun's orbit.

Today, many in the West form an intuitive common-sense view of Islam based on their personal experience of Muslims as neighbors, colleagues, or fellow citizens. They reach conclusions which are reasonable based on their limited knowledge and experience; it is a conclusion reached by millions of people today, many of them very clever. We can call this the naïve view of Islam (which may actually be shared by many Muslims).

Whilst failing to make any serious study of the subject of Islam, or deliberately avoiding it, they arrive at the conclusion that Islam is much the same as any other religious belief system. If they are generally positive about religion this conclusion will be broadly positive; if they are generally negative about religion, it will be broadly negative but only in the same terms as every other belief system.

I would argue that we can discern two major differences of orientation to the understanding of Islam. The first is the naïve view, the second the systemic.

My observation is this: we have to have an understanding of the system as a whole in order to overcome the natural illusion of the Sun orbiting the Earth.

It’s the same with Islam: we have to have an understanding of the origins, the theology, the history, and the conditional, circumstantial character; situational programming; adaptive unfolding; in short, we have to understand the systemic nature of it. I would go further and say that it is impossible to understand what's going on in relation to Islam without this systemic perspective.

I tried to make this point in Refusing Galileo’s Telescope but it suffers from being rather a lengthy essay.

As a starting point with someone who has the naïve view of Islam we can ask them how they understood the Sun’s orbit as a child: Did you think the Sun went round the Earth?

Posted by Greg Hamilton at 16:08 No comments: 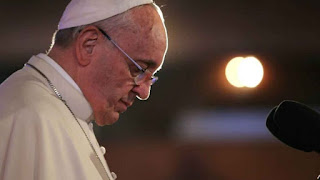 In a very clear illustration of the disconnect between Western liberal (Marxist, progressive) worldviews and that of the most rigorous Muslims, Pope Francis has received a firm rebuttal of his pie-eyed view of Islamic terrorism and the Islamic State. In his recent visit to Poland, Francis has set out in mind-boggling clarity just how far from reality he is. He put forward his belief that all religions are by their very nature peaceful and that the world is not at war due to religious ideology but due to the love of money.

Muslims become terrorists not because their religion teaches them to kill non-believers but because they have lost all hope, due to such things as poverty and alienation. Raymond Ibrahim reports on the Pope's views here.

But Islamic State beg to differ and demonstrate their impatience with the obtuseness of Pope Francis, however much he offers to uphold the Western elites' blindness to reality on their behalf. They point out what those of us in the counter-jihad have been trying to communicate for years: their religion obliges all true Muslims to wage war against non-believers until "all religion is for Allah". It is terribly simple to understand but astonishingly hard to believe. Read their statement here. 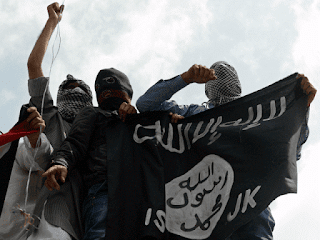 Posted by Greg Hamilton at 18:20 No comments: