We all are engaged in a continuous process of evaluation of our social world, a world which includes both our political opponents, people from different cultural backgrounds to those closest to us in upbringing and outlook. To make evaluations of these people, their similarities to us, their beliefs, and their intentions we evaluate information that we get from outside in terms of criteria applied according to what is likely to be true for others. We might see Republicans as selfish and mean-spirited for example. This will make it more difficult to accept as a fact that Republicans give more to charity than Democrats (which is actually the case).


I want to begin an exploration of the factors which influence these processes by looking at some of the complexities of visual perception. Visual perception is the channel through which huge amounts of information regarding the social world enters our minds. The processes operating at this level are therefore important for understanding how accurate the information is and what factors are at work to make it less accurate.


Let’s start by looking at the constructed nature of visual perception of objects. Contrary to what common sense tells us about what we see, the world of objects is a mental construction from the information available to our visual cortex. I’m not suggesting that reality is completely made up. What psychological research tells us (from over 100 years of investigation) is that our brains build a representation of the physical world by using various cues. For example, take depth perception, our 3 dimensional image of the world around us; the information available to our brain is an inverted 2 dimensional image on each retina. Our brains use cues like superimposition (where an object near to us obscures an object further away) to infer that one object is closer than another. Take another cue: objects further away look smaller even though we know they don’t change size. This helps our brains to assess the relative distance of similar objects. Notice the word “infer”. Our brains do this automatically and generally arrive at the correct conclusions. There are instances where the depth cues can fool us, such as the room. 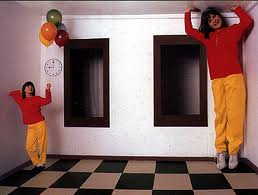 In the room one person looks huge while another person looks tiny. This is because the brain has been fooled into using depth cues to arrive at the wrong conclusion. Even though we know it is unlikely to be true the depth cues are too powerful and automatic to be overruled. The depth cues of linear perspective are so strong we can't prevent them from creating this illusion even though the relative sizes of the people in the room are completely improbable.

What is the brain doing?  The eminent British psychologist Richard Gregory suggests that the brain is engaged in a process of hypothesis testing, looking for the best fit for the available information and using the "rules of thumb" that our brains have developed over millions of years. This hypothesis testing activity can be seen when looking at the Necker Cube: 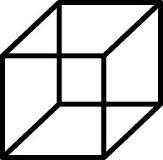 The brain looks at the cube one way and then finds another way which is equally plausible (the nearest face can be bottom left or top right). Our brain switches back and forth trying one “hypothesis” then the other. The key point to take from this is that the brain, even at this basic level of perceiving simple figures, is interpreting the available information. There is no fact in the naïve sense. The only "fact" in this instance is a set of black lines on a white background. Our brains build this into a cube.


Another example of our inability to overrule the interpretive nature of perception is the Muller-Lyer illusion.


There is another important facet of perception at this level and that is selection. The amount of available information is huge so the brain filters out what appears to be less relevant. The area around the focal point, for example a face we recognize in a crowd, is given more detail, while the faces around it are given much less. We can choose to attend to particular areas of the visual field but we can’t give the same amount of attention to all of them at once.


These processes start to get even more interesting when look at the issue of perceptual set. Perceptual set refers to a whole range of factors which lead to systematic filtering and biased interpretation of the visual information (though it can also apply to other senses like hearing). One important factor in perceptual set is expectation. We interpret what we see in terms of what we expect to see. A simple piece of research shows this in action. One group of people is shown a list of numbers and a second group is shown a list of letters. In each case the letters or numbers are shown briefly for a fraction of a second, one after the other. At the end of the sequence in each case an ambiguous figure which can be either 13 or the letter B is shown. You can test this yourself by scanning left to right, then top to bottom. 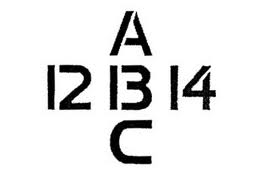 Affective priming is another important factor in perception. The founder of experimental psychology, Wilhelm Wundt, proposed the concept of "affective primacy". Affect refers to small flashes of positive or negative feeling that prepare us to approach or avoid something; it instantly primes us towards acceptance or rejection. Everything and everyone we encounter will trigger a small flash of affect. Try scanning through the headlines of a newspaper and take note of the flashes of emotion they set off. Wundt argued that affective reactions are so tightly integrated with perception that we find ourselves liking or disliking something the instant we notice it. (I'm basing a lot of this on Jonathan Haidt's book: The Righteous Mind where you can enjoy a much more thorough discussion of this topic.)

Research carried out by Robert Zajonc between the 1960s and 1980s showed that feeling of this kind occurs much faster than thinking and is much more powerful. Thinking is an evolutionarily newer ability which is rooted in language. Feeling carries far more motivational force and is much more closely integrated with behaviour.

Zajonc concluded that thinking could work independently of feeling in theory, but in practice affective reactions are so fast and compelling that they act to steer our thoughts and prime our perceptions.

Jonathan Haidt goes on to cite very interesting research which looks at alterations to peoples' reaction times when presented with faces from different racial groups. Depending on the nature of the task, a person's pre-judgements, which include affective flashes, can be shown to slow down or speed up response times. You can try this for yourself at ProjectImplicit.org

As Jonathan Haidt says, "The bottom line is that human minds, like animal minds, are constantly reacting intuitively to everything they perceive, and basing their responses on those reactions. Within the first second of seeing, hearing, or meeting another person, the elephant [Haidt's metaphor for the animal brain] has already begun to lean toward or away, and that lean influences what you think and do next. Intuitions come first." [my emphasis]

We can also add that the affective response will configure your perceptual systems to "see" in accordance with those affects. This feeling-toned thinking is part of the human condition. We are not computers. There is always an emotional and intuitive substrate to our thinking; it guides us, deceives us, compels us. We are held in the orbit of the lower self to a greater or lesser degree.

Just how compelling are these effects? There is a massive amount of research showing that we judge attractive people to be smarter and more virtuous (it's known as the halo effect), and we are more likely to give a pretty face the benefit of any doubt. Juries are more likely to acquit attractive defendants, and when beautiful people are convicted, judges give them lighter sentences, on average.

When these affective flashes contain feelings of approval or condemnation, we are experiencing moral emotions. These are particularly relevant for understanding both our own minds and the particular dynamics of the Liberal Mind.

I'll be returning to these findings and making use of them when I focus more directly on the Liberal Mind. Obviously, all that I have said so far can be applied to any of us but they can be used to help us understand the Liberal Mind too.

Go to: Part 2 - Patterns and Intentions