Searching for alternatives to "extremism"

Following on from my last post on the Islamic authenticity of so-called "extremism", I thought I would try and explore the subject a bit further in the light of material that has come to my attention over the past week and try and formulate a succinct and alternative way of referring to Islamic extremism/radicalism since it is this so-called extremism which is actually the real deal.

The fact that "extremism" and its counterpart the "countering violent extremism" (CVE) narrative are misleading and, for non-Muslims, self-defeating terms has been pointed out recently by Stephen Coughlin who was formerly an intelligence analyst for the Pentagon.

As he details in this video, the CVE narrative has been carefully crafted in line with Muslim Brotherhood affiliates and serves to lead counter-terror operatives off the trail and into a thicket of misunderstandings and dead-ends whilst simultaneously turning the spotlight of "counter extremism operations" on the so-called "far-right" which encompasses just about anyone concerned enough about the conquest of the world by Islam to stick their head above the parapet of political correctness.

In this interview with Jamie Glazov, we see the CVE narrative doing its nefarious work as pious leftist Tamara Holder scolds Bridget Gabriel and other freedom fighters as "the most dangerous people" because they "spew hate". You cannot oppose the most ruthless ideology on earth without earning the label "dangerous extremist". Further into the video Tamara Holder again fights in the way of Allah by vilifying Jamie Glazov as "disgusting". As Jamie reflects after the clip from Hannity, being deeply concerned about the victims of jihad and Islamic gender apartheid makes him disgusting in the eyes of this leftist harpy.

Then there is this question: how normal are the attitudes and behaviors in the Muslim world that are labelled extremism in the free world? When we say normal we mean occurring very frequently among a population.

Nonie Darwish answers that question in this article. In it she reveals that hostility to non-Muslims; the aspiration to so-called martyrdom (in its bastardized Islamic form); celebration of jihadists; rewarding of jihadist families are all common and no cause for shame or concern, quite the reverse.

So while people in the free world are scratching their heads about how people become radicalized, as they call it, the Muslim world is celebrating the behavior that non-Muslims innocently assume they deplore. The Muslim culture provides an environment where it is miraculous that anyone is not radicalized.

The observations made by Nonie Darwish are corroborated by the findings of many surveys undertaken by Pew Research. In the chart showing support among Muslims for making Sharia the law of the land, those countries in the Islamic heartlands show very high support for the proposal.

So, in the Islamic heartlands what western policymakers like to think of as extremism is simply normal. And, as Islamic populations in the free world grow we become more and more aware of how normal extremism is among them too.

This is entirely explicable as the result of the severity and ruthlessness of Islamic principles. Those most devoted and committed to Islam are the most dangerous; the notion that jihadists are in any way deviating from Islam is a howler of a fallacy. No Muslims embody the religion of Islam more fully, more completely than they do.

We have seen this reported time after time in the development of jihadists. This article by Paul Sperry looks at the frequency with which Muslims who end up killing non-Muslims in the cause of their faith progress along the exact same path of greater and greater religiosity until they are fully committed to Islam and ready to kill and die in the way of Allah. For this to happen by chance is absolutely impossible and anyone with a reasonable knowledge of Islamic doctrine, Islamic history and Islamic culture will be able to understand exactly why it is so predictable.

All this really must lead to a review of the word "extremism" in this context. It doesn't make sense and it is very misleading. But what are the alternatives?

At the individual level the preoccupation with and commitment to Islam becomes a larger and larger proportion of the self until the self and devotion to Islam are identical. This is the point of full submission and total obedience to Islam.

Similarly, at the societal level, the proportion of Muslims in the society grows as does the degree of observance of the individual Muslims in that proportion; the non-Muslim portion is displaced just as the remnants of unbelief are displaced within the Islamizing individual.

A simple model for this process is concentric circles where the outer ring is the Islamized self and the inner part is the yet-to-be-Islamized self. This outer ring spreads inwards until the totality and core of the self is engulfed. This represents the totally committed Muslim.

Stage 1 - the outer ring of Islamic belief surrounds the self: 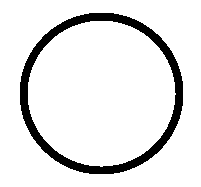 Stage 2 - the ring of Islamic belief becomes a greater  part of the self: 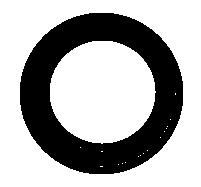 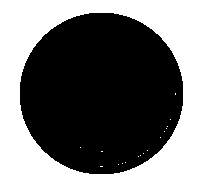 The self is 100% Muslim. The individual self has been eclipsed by belief.

At the societal level it might be better represented in reverse as a minority becomes the majority:

Stage 1 - the Muslim population is a small proportion: 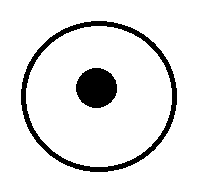 Stage 2 - the Muslim population is growing: 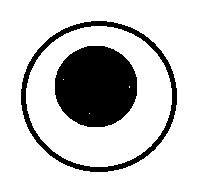 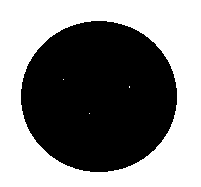 So my question is what word or phrase can describe this 100%-ness? I'm only interested in the individual level. The following are suggestions but I'm far from happy with any of them:

Something crisp, perceptive and catchy is required.