The Compassion of Donald Trump

The girl in the picture below is one of thousands of sex slaves taken by Islamic State in accordance with the example and teachings of Muhammad. 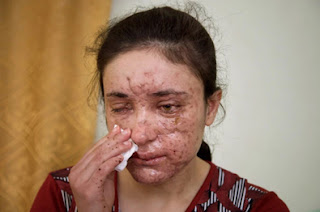 What on earth has this poor soul been through? We will never know but we can be pretty sure it has been hell. Such is the misogyny encoded in the "sacred" texts of Islam that the taking of sex slaves as war booty has Sharia's seal of approval. This is the result.

It is the tip of a huge iceberg. The abuse of women throughout the Muslim world, where customs and traditions do not escape the influence of Islam due to Islam's all-encompassing and dominating nature, is widespread, horrific, and legal.

This reality is not something that liberals have so far been able to face up to. They have adopted a well-known arsenal of deceptions, self-deceptions and assaults against free speech in order to deny this reality. They are loathe to let go of their view that Muslims are a harmless, oppressed minority with no more inclination towards terror and subjugation of unbelievers than anyone else; they adopt preposterous ideas such as "Muslims are the new Jews"; they avoid looking at Islamic doctrines and history because it might run counter to their fantastic pre-judgements.

There was an interesting display of this recently on the ironically named "Women's March" in Washington to protest the inauguration of Donald Trump.

Take a look at this short video where protestors are confronted with the statement "Islam is misogynistic". They display an unwillingness to talk about the issues around Islam's treatment of women; they claim that wanting to talk about these issues  is "hate"; they sidestep the issue with the usual claim that all religions are misogynistic; one speaker is very proud of herself for saying that all religions are inherently patriarchal; one man thinks he can't comment because "I'm not a Muslim". I've heard this kind of nonsense from liberals so often it hurts.

Because they are so ignorant, they are easy prey for those wanting to exploit them. One of the march's main organizers, Linda Sarsour, is rather positive about the Sharia Law. She tweeted, "Shariah Law is reasonable and once u read into the details it makes a lot of sense. People just know the basics."

The Koran says, "O Prophet! Lo! We have made lawful unto thee thy wives unto whom thou hast paid their dowries, and those whom thy right hand possesseth of those whom Allah hath given thee as spoils of war." (33:50). For commentary and justification of sex slavery by eminent scholars see here. I think Linda Sarsour would agree that these scholars know a lot more than the basics and they agree whole-heartedly that Sharia approves of sex slavery.

So the millions of victims of Islamic misogyny will have to find their salvation elsewhere. Maybe many of them are wishing Donald Trump every success in his stated goal of eradicating "radical Islamic extremism". Not blinded by the obsessive requirement to avoid any discrimination, Donald Trump is able to identify the people suffering the worst persecution and he wants to help them. That is real compassion. It is compassion born of courage; the courage to look facts in the face and to do what is necessary whilst millions of fools revile you; fools defined by their indifference to their own ignorance.